THE seventh Tarawera Ultramarathon ended with smashed records on Saturday.

Ruby Muir won her second Tarawera title with a 9.02 time, blitzing the women’s record by over half an hour.

The race, which began in Rotorua and finished at Kawerau’s Firmin Field, included nearly 1000 runners across 100km, 85km and 60km races with two and four-person teams competing in the 85km race.

The 100km event had 431 runners cross the finish line.

There was strength in depth aplenty, with all five of the top men and women going under the old record times.

The early pace was crazy-fast. Several relay runners, and top men’s 100km contenders China’s Yun Yanqiao and Great Britain’s Robbie Britton stretched the 900-runner field from the start, through the Rotorua Redwoods, around Blue Lake and down to Lake Okareka.Bowman by contrast held back early, then began to pull in the leaders on the hilly Western Okataina track. He hit the front at about 40km and kept the effort on all the way home.

“The last 10km was painful. But that’s to be expected,” Bowman said.

The guy who finished second  [Jorge Maravilla] is one of my best friends. I know his strength is on the downhill and flat, so I kept the pedal down.”“It’s a world class race. It’s an amazing race,” Bowman said.

For the second year, the Tarawera race is in the Ultra-Trail World Tour series. This year it attracted over 300 internationals.

Muir put the hammer down from the start, leaving a shattered women’s field behind. At 60km, she was five minutes up on Taiwan-based Kiwi Ruth Croft.

Kawerau’s Lee Barton previously volunteered at the event with his partner Meagan and the pair agreed they would give the race a go when it finished in Kawerau.

When he began working towards his first marathon 12 months ago he had never run more than 10 kilometres in one sitting.
Training for the event was a big commitment with three children, especially in the last two months leading up to the event, he said.

In the first 10km on Saturday he rolled his ankle but a tightening of laces at the aid station helped and was in good shape heading towards the 40km mark, he said.

“In one of the most remote parts of the course just before 50km and only 20 metres from the aid station I had another rolled ankle on the other foot. I couldn’t weight bare on it and I thought I was done,” he said.

“I shuffled off aiming to make the Tarawera Outlet and simply see how things were by the time I got there.”

At the registration he talked to Jo Petersen, who has run in all seven Tarawera 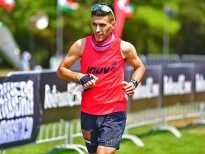 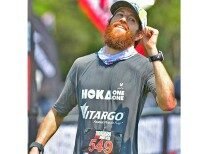 HARD YARDS: American Michael Wardian comes to the end of the race in Kawerau. D1672-012 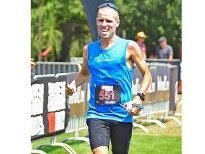 HOME STRETCH: Vajin Armstong was the only New Zealander in the top five of the men’s field. D1672-001 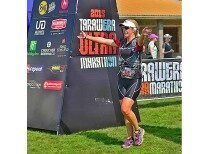