A MASSIVE icecream topped off a successful weekend for BMX star Sarah Walker.

The 27-year-old Kawerau rider afforded herself a treat after claiming the National and Oceania titles at Pukekohe at the weekend.

More important than dessert, was the step Walker took toward competing at the Olympics Games in August.

The Oceania championships were held on Sunday and counted as qualification points toward a New Zealand rider competing at the games in Rio de Janeiro.

Walker placed fourth at the 2008 Olympics in Beijing and then claimed silver in London four years later. Her performances in Pukekohe have her on track for a third Olympic campaign.

“What excited me the most was that these results came off the best training block I have ever had. I worked really hard, tracked well in testing, and was much faster and stronger than I was the week before London. I was really excited to get out and race.”

Walker was unbeaten on Saturday to claim the national title and on Sunday, the Oceania crown was decided over three races.

Walker finished third in the first race after a wide lane draw but nailed the second race to lead from the snap.

Australians Caroline Buchanan, ranked number seven in the world, and Lauren Reynolds made the early running in the deciding moto, but Walker fought back on the second straight and showed her handling talents to haul in Buchanan on the final straight, with a photo-finish required to determine the winner.

The victories are an exclamation point in a comeback from a major crash in 2014 when she suffered a concussion and broke six bones, including both her arms.

The concussion proved to be the biggest challenge and for a time she needed help to brush her teeth.

Her return included a bronze in the time trial at last year’s world champs and then encouraging results on the world cup circuit. But regaining the confidence which has earned her national and world titles took time.

“The coolest part about this weekend was I didn’t have this overwhelming feeling that I got through unscathed. It was a huge step forward for me.

“When I had the injury, I had no idea what lay ahead. I wasn’t going to finish like that. But I did think ‘what if this is it?’

“When I got the go ahead, I trained as hard as I could. Having that reality and getting a second chance has made the pain of training so much nicer.”

Between Walker and Rio de Janeiro are World Cup events in Argentina, England and the Netherlands before the final qualification opportunity at the World Championships in Colombia in May. There are three spots up for grabs, with five countries competing for them.

Walker said it would be ideal to qualify for the Olympics before the world championships. In spite of the agonising fourth and a brilliant silver at her two previous Olympic efforts, Walker was not too focused on the gold medal.

“To be honest, it is not a major focus. To me it is just about being the fastest ride I can be and training as hard as I can. If I am the fastest in the world there then that is great, but if not I can say I have given it everything I have.”

Jayda steps up for big weekend 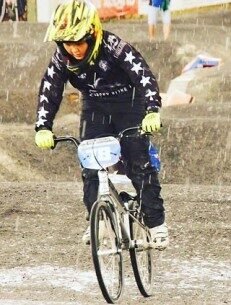 THE Eastern Bay had two double champions at major BMX events at the weekend.

Nine-year-old Rangitaki Independent School student Jayda Lilly-Lees told the Beacon in October after winning the North Island title that it was the biggest win of her fledgling career.

She eclipsed that at Pukekohe on Saturday and Sunday. Emulating one of her heroes, Olympic silver medallist Sarah Walker, who also won two titles, Jayda captured the Auckland and Oceania titles in the 10-year-old age group.

The result followed up on Jayda’s runner-up placing at the national championships last year after finishing fourth in 2014.

Her focus is now on the New Zealand Championships over Easter Weekend. Jayda’s build up to the Pukekohe events included her first overseas trip for competition.

She took out the age group section at the Gold Coast Championships in Australia.