PORTRAITS of Te Whata Tau o Putauaki students will be exhibited at the Kawerau Town Hall next week following a successful class project.

Teacher Warati Paraha said her year 8 and 9 class worked on a photography project during term one with inspiration from artists such as Lindauer and Goldie, and Soldiers Rd, which specialises in vintage portraits.

The class exhibition, Tatai Whakaheke (Descendence), featured individual portraits of the 18 students in her class and 10 staff.

“Tuwharetoa ki Kawerau Services commissioned the first print to canvas of 28 portraits and the students hosted their own exhibition at school, which many whanau, especially their koroua, attended.

The portraits were taken, styled, directed, managed, filtered, edited and then published by the students.

“It was such a special way to bring our community together and very empowering for my students to take a lead role and showcase their work.

“Success, satisfaction, achievement and pride were experienced by all.”

From that, the class were sponsored by Complete Site Works to shoot and print to canvas each student at the school.

Ms Paraha said for her and her students, the project was about the learning journey, acquisition of knowledge and skills, and team work.

“In terms of the art, it was about the research and opportunity to observe images of tipuna Maori.

“Our photos strive to replicate imagery of the time, when it took a long time for shutters [to close], causing seemingly empty, expressionless stares.”

During the first exhibition whanau, especially matua and kaumatua, noticed how much the students looked like their tipuna. They had very old photos at home that looked like the modern photos.

“This idea is captured in the name of our exhibition, Tatai Whakaheke, which encompasses the idea of being a prodigy of your ancestors.”

Tatai Whakaheke, an exhibition of 113 photographs, will be held in the Kawerau Town Hall from Tuesday, June 28, until Thursday, June 30.

The opening public pohiri will be held on Tuesday at 11.30am. 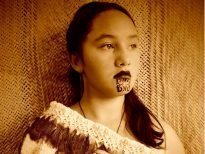 PROJECT: Student Te Tai Ata Hona will have her canvas portrait on display at the Kawerau Town Hall next week.