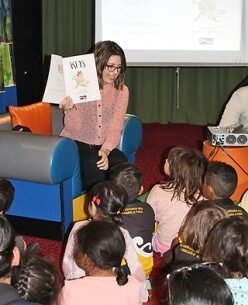 PUBLISHED: New author Sacha Cotter will be back in her home town of Kawerau this Christmas and will read her book Keys to children at the Kawerau Library.
Photo supplied

IT was an “amazing” teacher at Kawerau South School that instilled a love of storytelling in Sacha Cotter.

Now, more than 25 years later, the former Kawerau girl has had her first book published.

Keys, with the te reo Maori version Nga Ki, was launched at the Wellington City Library recently, to an enthusiastic audience of children from local kohanga reo and kindergartens.

After the launch Cotter read her book, beautifully illustrated by Josh Morgan, to an excited group of children.

“It was the first time that I had ever read a story of mine to a group of children – it was really quite surreal,” she said.

“But right from the very first page they were engaged.

“They helped me spot the mischievous cat and they joined in to help me make the keys sing.

“When I was seven years old I had an amazing teacher at Kawerau South School. Her name was Mrs Coles and it was in her class and with her encouragement that I discovered the magic of writing stories,” she said.

“When Huia Publishers decided to take on Keys/-Nga Ki, it felt like that childhood dream had finally been realised. I felt like I had won Lotto.

She said the first draft of the book didn’t take long to write.

“It was one of those stories that just flowed and turned out quite well the first time I wrote it.

“I thought back to my earliest memory, of when my dad was working at Tasman Mill. A lot of the time I was already fast asleep in bed by the time he came home, but somehow, I would always wake up when I heard his keys jangling in the door.

“I’d jump out of bed and race up the hall to greet him and then he’d tuck me back into bed.

“This memory forms the basis for Keys. From there I just let my imagination run wild, which I love to do, so imagining all the possible things a set of extraordinary keys could open came naturally to me.

When she finished Cotter said she left the story sitting around for a year before editing it and sending it to Huia Publishers.

“It must have been the right story at the right time, because they contacted me almost immediately.”

She wants to write more children’s stories and recently completed a writing workshop at Victoria University where she began what she hopes will become a novel for seven to 11-year-olds.

“I have loads of ideas and half-written stories just sitting around waiting for me to find the time to work on them,” she said.

Cotter attended Kawerau South School until she was about eight, then completed her education at Otakiri Primary School and Edgecumbe College.

She went on to become a teacher, training by distance learning with Canterbury University while living in Whakatane, and taught at Ohope Beach School in 2008 and 2009. She is now a librarian at Victoria University.

Cotter will spend part of her Christmas break back in her home town and will read Keys to children at the Kawerau Library on December 29 at 10.30am.