GRADUATE: Four years after leaving the army Matthew Tihi graduates with a bachelor of law with honours on May 6.

KAWERAU born Matthew Tihi has gone from serving overseas with the New Zealand Army to graduating with a bachelor of law this year.

He spent 16 years in the army, first as an armourer and then as an officer, rising to the rank of captain and served overseas four times, twice in East Timor and twice in Afghanistan.

Throughout his service he never forgot his goal of becoming a lawyer – his dream since attending Kawerau College.

Mr Tihi studied at the University of Auckland from 2012 to 2015 and graduated on May 6 this year with a bachelor of law, with honours.

He said law school was tough but to become a lawyer he knew he had to work hard.

“Fifteen hundred students start first year law and only 300 get through to second year. They literally rank every student by grade point average and then draw a line at 300.”

Having participated in courses in the army, Mr Tihi was somewhat familiar with study and the discipline he learned was adopted which helped him stay focused.

“While law school and the army are very dissimilar, I approached them in the same way. I got up early regardless of whether I had class, I exercised and I worked to a timetable.”

During his four years at university he was awarded a variety of scholarships which seemed to be awarded at a time when he was feeling overwhelmed.

“This money really helped out at a critical time. But not only was it an awesome financial boost, more importantly it was a massive boost to my morale.”

With that support, during his study he and his wife Lara created and funded a new law prize at the University of Auckland in 2015.

The He Maunga Tei Tei Prize for Academic Achievement is awarded to the top Maori student in all compulsory law courses and was presented for the first time at the 2016 Law Awards.

“Part of the reason behind creating the prize was to give back to other students, and let them know that they’re doing well.”

He is now employed by the Auckland law firm Minter Ellison Rudd Watts and works in the construction team.

“But whatever you do, do it because you love it. Never settle for good enough.” 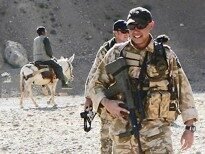 ARMY: Matthew Tihi in Afghanistan during his 16-year service with the New Zealand Army. Photos supplied.