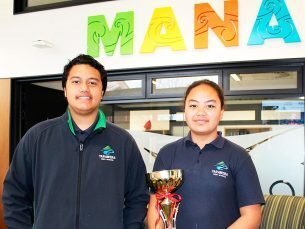 Seventeen schools were represented at the Mandarin speech contest, held at Western Heights on August 19. Both Tarawera students placed first in their categories.

Year 9 student Majean said learning Mandarin would be helpful if he ever travelled to China and year 7 student Nikia said it would help her learn about Chinese culture.

Mandarin teacher Liu Ziqi, known as Katy within the school, said the results were overwhelming.

“It is the first year Kawerau students have learned Mandarin and taken part in such a competition. I feel so proud of them.”

Majean and Nikia Davis have learnt basic Mandarin this year and were selected to compete because of their talent.

Miss Ziqi said it was not easy for new learners to master the pronunciation of Chinese in such a short time, but Nakia and Majean did it well.

Their speeches were more impressive with the addition of cultural factors.

“At the end of the speech Nikia sang a beautiful Mandarin song to show her love and respect for her mother and Majean added Maori performance into his speech.

“[Majean] was born for the stage; he was so confident and charming. He quoted a Chinese saying ‘He who doesn’t reach the Great Wall is not a true man’ to speak out his wish to visit China.”

Principal Helen Tuhoro said the school was “absolutely delighted” with the passion and commitment its junior students had shown toward their Mandarin studies.

After only six months of the Mandarin language programme they competed against students who had been working with full time teachers for many years.

“As a school, language is a growing area of the curriculum, with students able to learn Maori, French, Mandarin and Japanese at Tarawera,” Mrs Tuhoro said.