EIGHT Eastern Bay students have been recognised for their leadership qualities with a Sir Peter Blake Young Leader Award.

The awards, in association with Westpac, acknowledge young people whose outstanding leadership uplifts the school community.

“These young people are our future and we’re delighted to acknowledge their work and achievements. It’s always a highlight during the year to visit the school and present this award to the young student, it’s so positive.

Students were presented with a prize pack, certificate and Sir Peter Blake Medal and were nominated by their class or teacher.

Tarawera High School held an assembly for year 8 student Opal-Jae Herbert who received the award for her leadership within the junior school.

She was selected by her school because as a junior prefect she helped teachers and her peers every day and led karakia for her year group. She was also fully involved in the co-curricular side of the school, being an active sports person and member of the school kapa haka roopu.

Otakiri School’s young leader Cayla Jeffray, 12, was chosen because she showed initiative and worked hard to plan successful activities that raised funds for community projects. She was described as a very thoughtful person who showed special care for the younger students that looked up to her.

An example of her commitment was raising and lowering the flag every day for the past five years and 100 percent attendance for the past four years.

Whakatane Intermediate School’s award winner was Simon Proutt, a young man well-respected by his peers who has held multiple leadership roles within the school and was always a willing and enthusiastic participant in whatever he did.

The always-smiling Manea Lewis was said to operate effectively, quietly and respectfully with everyone she met. She was recognised by Allandale School as a top leader others aspired to be like because of her contribution to the betterment of students, teachers and the Allandale community. 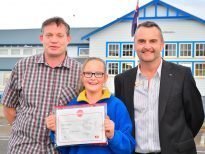 James Street School’s Chevana Larsen  inspired others with her ability in cross country running and actively looked for ways to encourage others to step up and accept challenges.

At Nukuhou North School Hunter Elliot-Laing was the award recipient because of the positive changes he had made over the past two years in how he interacted with others, which had helped him develop strong friendships.

Hunter was kind to everyone and able to deal with conflict in a positive way because he did not let past negative experiences impact his behaviour, his school said.

Te Kura o Te Paroa’s Teina Wahapango did not let major heart surgery when he was younger stop him from being a prefect and an excellent role model to all students, teachers and wider community.

He strived for excellence in everything he did and was a student who walked the talk.

Whakatane Seventh Day Adventist School’s Daniel Parsons modelled being a strong leader with his attitude to work. He was nominated to receive the Sir Peter Blake award because he demonstrated a respectful and willing attitude at school.