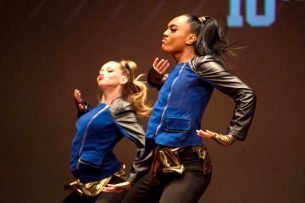 DANCE means everything to Puruakena August who will soon relive his dream of performing on an international stage once again.

The crew went on to place second in the varsity division at the national competition on April 30 and was awarded most outstanding performance of the night.

He said the first and second placings were “wow moments” and blessings as he believed the varsity division was one of the hardest in the competitions.

The second spot win, out of 29 crews, secured De Visu a spot at the world hip-hop dance championship this year.

Eighteen-year-old August also competed at the world competition in 2013 – an experience he describes as “a dream come true”.

He feels the same about this year’s competition and is looking forward to reliving the hype of the moment.

“When I went over the first time it didn’t hit me that I was actually there. Getting the chance to relive it again is amazing.”

August, who has been dancing all his life, said dance helped him grow as a person and gain the confidence he now lived with.

He used to dance with Kawerau crew Fusion and performing on stage in his home town helped shape the dancer he is today.

“I never thought about myself as a dancer or becoming a professional choreographer… the community support helped.”

His favourite dance styles are vogue, a modern house dance that evolved out of the Harlem ballroom scene, and dancehall, a style that originated from Jamaican popular music in the late 1970s.

He said his crew’s choreography focused on a mixture of his preferred dance styles along with many others.

After the national competition Mr August had a two-week break, which he used to spend time with his family in Kawerau before restarting training on Sunday.

In the lead up to the world championship an intense schedule would be organised for the eight-man crew, De Visu, in preparation of the international competition in August. 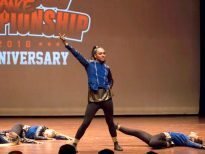 SECOND PLACE: Puruakena August takes centre stage with his crew De Visu who came second at the national competition this year qualifying them to compete internationally.