OVER SHE GOES: Dolly Bird, a cross breed rabbit leaps a jump while below, Fancy Pants thinks hard about it first.
Photos Louis Klaassen

WHEN Kathy Davis first heard about competitive rabbit showjumping her reaction was – like most people – “What the …?”

But the Kawerau rabbit breeder now has three showjumpers she has trained herself and is keen to involve more rabbit owners in the sport.

Mrs Davis breeds satin and New Zealand white rabbits for showing but has found that rabbits not up to showing standard can still shine through jumping.

“New Zealand is about 30 years behind the rest of the world as far as rabbit jumping is concerned,” Mrs Davis said.

The sport started in Sweden in the 1970s and has spread throughout Europe, America and Australia.

International competitions are held in several countries. The rules were originally based on horse showjumping but have been adapted to suit rabbits. The jumps are much smaller, of course, although

Mrs Davis said she had a friend in Christchurch with a rabbit that could clear one metre.

Mrs Davis has been training three of her rabbits, Basil, Eddy and Petal.

“Basil can clear 35 centimetres when he feels inclined,” she said. “The reason I’m pushing it as a hobby is to get people to get their bunnies out of their little cages and having fun.

“I’m amazed at how well it has taken off. We have about 85 people nationally who have got on board.”

She said it was a lot of fun for both the rabbits and their owners, although some rabbits took to it more readily than others.

“Any breed can jump, although lops, Dutch and cross-breeds are the best jumpers. The smaller rabbits can generally jump higher than the larger ones. They can be trained to a harness quite easily.”

Mrs Davis has started a Bay of Plenty Rabbit and Cavy (guinea pig) Club, not just for people interested in jumping but for breeding shows, pet shows and to provide a source of pet care advice. The club’s

Facebook page allows for people to ask questions about rabbit and guinea pig care, as well as cage-building tips.

She said she used to sell rabbits that weren’t suitable for showing as cheap pets but there was such a high mortality rate she has had to stop.

“About 80 percent were dead in a month. I’ve heard, ‘The cat ate it’, ‘the dog attacked it’, ‘it ran away’, and ‘I don’t know what happened, it just died’. Most of the time it’s just down to poor housing and lack of care.”

She held a pet show in Kawerau in January and has another planned for next year.

Mrs Davis is no stranger to setting up a club of this sort. She set up the Waikato Rabbit Club in 2001 while living in Hamilton. The key to making such clubs successful was making it fun, which is where the jumping competitions come in.

“The pet shows are lots of fun. We also do guinea pig races and we’re working on getting guinea pig and rabbit agility courses going, which are based on the sort of agility competitions they hold for dogs.”

She is holding training days on her front lawn on Tuesday’s from 3.30pm to 4.30pm for rabbit owners keen to get involved.

If you are interested in learning more Mrs Davis can be contacted through her Facebook page, Bay of Plenty Rabbit and Cavy Club, or by phoning 07 3237370. 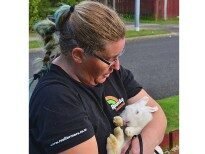 QUIET MOMENT: Kathy Davis cuddles Petal, one of the bunnies she is training to jump. D2157-56