A NEW mural illustrating the history of Te Teko is taking shape along State Highway 30.

Last year Ms Elliot saw artist Bela Ughy completing a series of murals around Kawerau to mark the town’s 60th anniversary and stopped her car to talk to him.

The painting, on the corner of Tahuna Road and State Highway 30, features a montage of Te Teko’s old shops, Mount Putauaki, horses and a train.

Ms Elliot said it should be completed by the end of last week, and further murals were being considered for other vacant walls around the town. 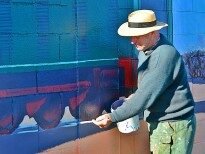