AFTER opening its doors 17 months ago, Kawerau Medical Centre has added three new rooms to its Islington Street centre to accommodate growing enrolments.

The centre aims to provide specialists with a Kawerau location to hold outreach clinics.

A new day theatre and ancillary services are also available.

“The extension work was driven by significant growth and patient demand and the steady increase in patient enrolments since KMC opened,” Dr Hermanson said.

The practice has 3400 enrolled patients, approximately 50 percent of the Kawerau population.

Kawerau Medical Centre and the KMC Specialist Centre were established to reduce barriers to health care, such as transport and cost, Dr Hermanson said.

The idea was to bring specialists to Kawerau, rather than have the patients travel.

“So far we have four confirmed specialists who will be using the facility and we are [fielding] inquiries from other private and hospital-based specialists.” 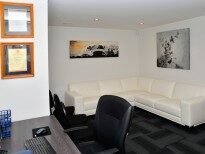 Dr Hermanson said the practice had discovered 12 percent of people had no transport at all and 20 percent no phones, meaning a large number of Kawerau people simply could not make appointments, let alone keep them.

“We have put a lot of emphasis on what we wanted the environment to be like for those who call in for health services.”

She said the practice’s goal was for health and healthcare to be a positive, warm, inviting experience.

“We have really nice artwork on the walls, not medical posters. People comment that it feels so nice in here.

“It’s almost like they’re telling us they feel better already before we’ve even done anything,” Dr Hermanson said.

The team at Kawerau Medical Centre had received positive feedback from the community since opening. She said it was “quite humbling”.

“We had to battle a lot of obstacles and others that didn’t agree with the approach we’ve taken, but the community are right behind us and that’s buoyed us.

“That’s why I wanted to be a doctor in the first place – to work in a high-needs community and contribute to rural health.”