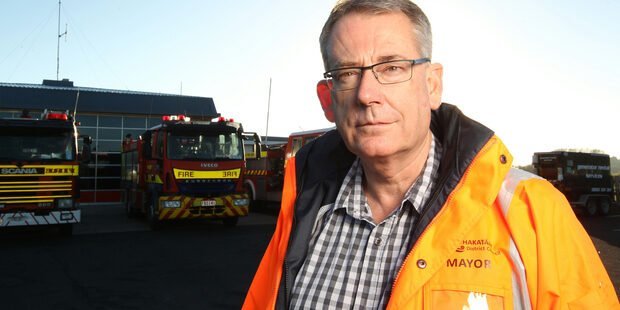 Whakatane Mayor Tony Bonne says he cannot thank volunteers enough for the help they have given to Edgecumbe’s flood-hit residents. Photo/file

At a ceremony held to recognise and thank everyone involved, Kawerau District Council Civil Defence manager Chris Jensen said his team was very special in the way they had come together.

“It was incredible. When I walked into the centre everything we’d practised was being done and (welfare managers) Hannah Edwardson and Sandy Hohepa gathered everyone around them. It was a wonderful thing to be part of.”

Mr Jensen paid special tribute to Te Waraki (Chic) Te Ruki and the trustees of the community marae for opening their doors to neighbours in need and for allowing the centre to get up and running.

He also acknowledged the work of the Kawerau Youth Council, which helped organise activities for the children of affected families and were there to lend a hand with anything put their way.

“Many other agencies and a dynamic crew of volunteers also contributed to the efforts,” he said.

Special thanks were given over to the work of the Maori wardens who managed security and parking and kept the centre safe overnight.

Kawerau’s Civil Defence Centre opened its doors on April 6, after Edgecumbe was flooded when the Rangitaiki River burst its banks. In total 654 people registered there for help, whether it was for food parcels, accommodation, clothing or other support.

Kawerau mayor Malcolm Campbell and some of his councillors were joined at the ceremony by Whakatane mayor Tony Bonne and deputy mayor Judy Turner.

“On behalf of the Whakatane district I can’t thank the volunteers enough.”