Bubble soccer a blast with youth

The fun day of school holiday activities was hosted by Kawerau District Council staff and volunteers, which included inflatable bubble soccer outside and lazer tag inside the centre.

It aimed to attract young people and collect their views about living in Kawerau, information that would be the building blocks for the town’s draft youth policy.

These booklets included space for stamps from each activity: lazer tag; a sausage sizzle; bubble soccer; and consultation about Kawerau.

When each participant filled their passport they could enter it into a draw for a giant Easter egg and other chocolate treats.

Students from the Kawerau Youth Council and Take the Lead programmes ran laser tag and inflatable bubble soccer, while a group of six students walked around with surveys to collect further feedback.

Mr Rika said many of the young people involved asked if the day could become an annual event.

It attracted a good spread of participants and really captured the town’s youth voice, he said. 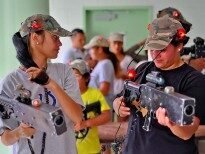 LAZER TEAM: Co-eds Te-Kira and Paige Mihinui prepare for a round of laser tag. 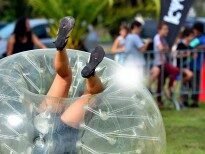 KNEES UP: A bubble soccer player rolls head over heels inside their inflatable suit.