Blokes sheds a good day out

TICKETS were limited to 120 for last Saturday’s Big Day Out for Blokes fundraiser, and they all sold out.

Twenty-five who missed out were so desperate to peer into 10 other blokes’ sheds they sneaked onto the tour, including this writer.

Hospice Eastern Bay volunteer co-ordinator Rosemary Sloman said 145 tickets were eventually sold. Combined with donations and proceeds from raffles about $3500 was raised for Hospice, she said.

Ten locations were available for viewing between 10am and 3pm.
“The best outcome for me was the opportunity for men to get together and talk to guys they hadn’t seen for years,” Mrs Sloman said.

With the closure of mainly male-orientated venues, such as the Te Teko saleyards, where men were once able to gather and chat, there were not many opportunities for them to encounter each other and catch up these days, Mrs Sloman said.

“So there were some real social benefits as well.”

She said she already had five new sheds lined up for next year.

“All sorts of people are coming out of the wood work and offering their sheds.”

Braemar Road recreational motorcyclist Adrian Collins had his accumulation of classic motorcycles – from 1963 to the mid-19902 – on display.

“I’ve always been a motorcyclist. I started picking up BMWs and I enjoyed working on them. Then it grew … a bike would come up for sale and I found I could not afford not to have it,” he said.

“I have a very understanding wife.”

He said a classic bike held its value and any time and money he put in added to it.

He has a pre-1972 BMW race bike capable of 210kmh that he races about 10 times a year at tracks around the country.

At the Bread Asylum on Manawahe Road Matata-born Maurice Lees has created a bakery project housed in a purpose-built kitchen and dining room sporting antique windows and doors imported from France.

Edgecumbe Lions president Bill Clark, ensconced at the bakery for the day, said it appeared wives and girlfriends had ordered their menfolk to return with a loaf “but many were seen picking at them as they walked back to their cars”.

Mr Clark said the event, a joint Hospice-Edgecumbe Lions event was a success and would be repeated next year.

Farmer Ron Sturme said 100 people braved the kilometre-long drive to his man cave, 140 metres above the Rangitaiki Plains at the intersection of Caverhill and Manawahe roads. The building is home to the 4WD vehicle in which he won the 2012-13 national four-wheel-drive title with his son, William. 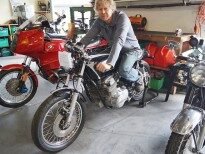 LOVES CLASSICS: Adrian Collings aboard his 1975 Honda CB750 Cafe Racer (the exhaust pipes are off being replated). D2169-04 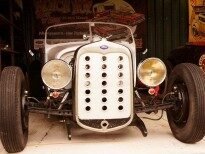 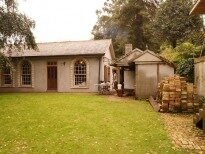